A place for those passionate about port, and for those new to it. We hold lots of Port tastings – please join us!
http://www.theportforum.com/

Cellar Defenders without Selos or Labels

Cellar Defenders without Selos or Labels

by Will W.
Picking up the cellar-defender thread which appeared at The Port Forum in July 2019, it might be of interest to some readers to set out, from time to time, the impressions of members upon consuming inexpensive ports sold without selos or, for that matter, without labels.

By way of a start:

Somewhat unusually – at least in my limited experience - this wine was offered for sale by the litre; upon agreeing to purchase fifteen litres after a chance to try it, I asked that it be bottled and sent to my office. About a week later, the package arrived so tightly packaged that I had trouble cutting through the tape and cardboard to get at the contents, which (to my amusement) consisted of a rather eclectic collection of twenty port and still-wine bottles of various shapes. The total cost worked out to roughly EUR 17 per bottle.

Over the last four months, or thereabouts, I have consumed four bottles of this particular cellar defender; and, as one might imagine, there is no bottle variation (beyond the aforementioned shapes) of which to tell.

The appearance of the wine in the glass is of the first order, showing the unmistakeable hues of Douro bake, to a degree consistent with the reported age, and a hint of lime on the rim. The nose is well pronounced, with caramel, citrus and raspberry all in evidence. The port hits the palate gently, with spices and the aforementioned citrus being particularly noticeable. As might be imagined, a lesser-quality aguardiente was evidently used in its production; whilst neither overpowering nor unpleasant, the spirits are certainly in evidence. The slight downside of this well-balanced wine, insofar as there is one relative to the price paid, is a rather clipped finish. The only bottle scored to date was afforded 89 points by consensus at a group tasting.

That's a really interesting story and made me think about the handful of times when I've consumed a bottle which did not have a sello attached.

Only at Quinta de la Rosa was I allowed to buy bottles to bring home - but then only because I was buying them from the restaurant and "forgot to open them" so brought them home with me. But they were expensive and in no way could be considered to be cellar defenders.

I've also consumed Port stored in barrels at a quinta or lodge, but never been allowed to buy any to bring home. Family reserves, aging stocks and unregistered wines fall into this category but they only count as cellar defenders if I'm in Portugal and nowhere near my own cellar!

You are very fortunate to have found a producer willing and able to share some of his family reserve wines with you.

by Glenn E.
The few bottles that I have been able to purchase without Selos are in no way cellar defenders - they have all be very old tawny Ports, often bottles straight from cask, that I will cherish and savor at significant occasions.

I would say that it is very unusual to be able to purchase a "younger" Port like this in volume. It sounds like a very nice Port!

by Will W.
There is a popular website in Portugal named CustoJusto (www.custojusto.pt) at which the Portuguese, as is their wont, advertise for sale all manner of goods, most of them rubbish. Stated succinctly, CustoJusto is a down-market, cyber, car boot sale, the one redeeming feature of which is a section devoted to wines and gastronomy. For those with sufficient reserves of patience to wade through the general tendency of CustoJusto advertisers towards the ludicrous over-pricing of indifferent bottles which have spent the past half century displayed on Grandmother’s sideboard, the occasional treat makes itself apparent. The colheita reviewed here fell into the latter category, leading about three years ago to the purchase by your correspondent of twelve or fifteen bottles thereof after an initial sample suggested that a larger purchase was in order. With the original consignment of this “cellar defender” – with apologies to Mr Tawny for the persistent use of such slander in the current context – nearing its end, it seemed at the weekend just past that the preparation of a tasting note would be warranted.

Additional regrets are in order for, when the bottles were purchased, your correspondent failed to take note of precisely where in the Douro the wine had been produced. (The personal assistant more immediately responsible for this oversight was subsequently sacked, though in fairness for wholly unrelated reasons.) Whilst all of the bottles do (and did) bear labels, these offer only the somewhat unusual name of “DA’Quinta” along with a suggestion that the region of origin is the Alto Douro. Additionally, the harvest of 1976 is cited, along with a bottling year of 2014.

On the eye, this colheita presented in a manner redolent of medium-strength, breakfast tea, albeit with a hint of cloudiness along with a tinge of yellow on the rim. There was no evidence of Douro bake in the colour, which would otherwise have been expected of a quinta-aged tawny of such maturity; one suspects strongly that a healthy dose of white grapes was added to the blend, either at the point of production or, perhaps, when the wine was bottled. If correct, this theory would explain the peculiarities in the colour as well as on the nose and mouth of this colheita. Whatever the reason, the said nose was quite pronounced, leaving the impression of honeydew or, if one prefers, spring flowers in a damp field. On entry, the palate was confronted by sweet lemon cordial, giving way to a lingering zest as well as pepper and vanilla. After the initial glass, notes of brown sugar of the sort commonly found in older tawnies fought their way onto the taste buds, suggesting a degree of sweetness which would have been difficult to countenance absent the aforementioned tartness. In principle, the sensations ought to have been incongruous; in the event, they worked surprisingly well together, making for a rather unique tasting experience. The medium-long finish afforded a further opportunity to ponder this highly unusual albeit pleasing colheita which, if memory serves, was priced somewhere in the region of EUR 15 a bottle. Whether the addition of white grapes - if white grapes were indeed added to the red - amounted to the act of a visionary in 1976, or that of a grifter in 2014, matters not at that price.

by AHB
Is there any chance of a photo of a label to accompany this wonderful description of a wine we are unlikely to taste? 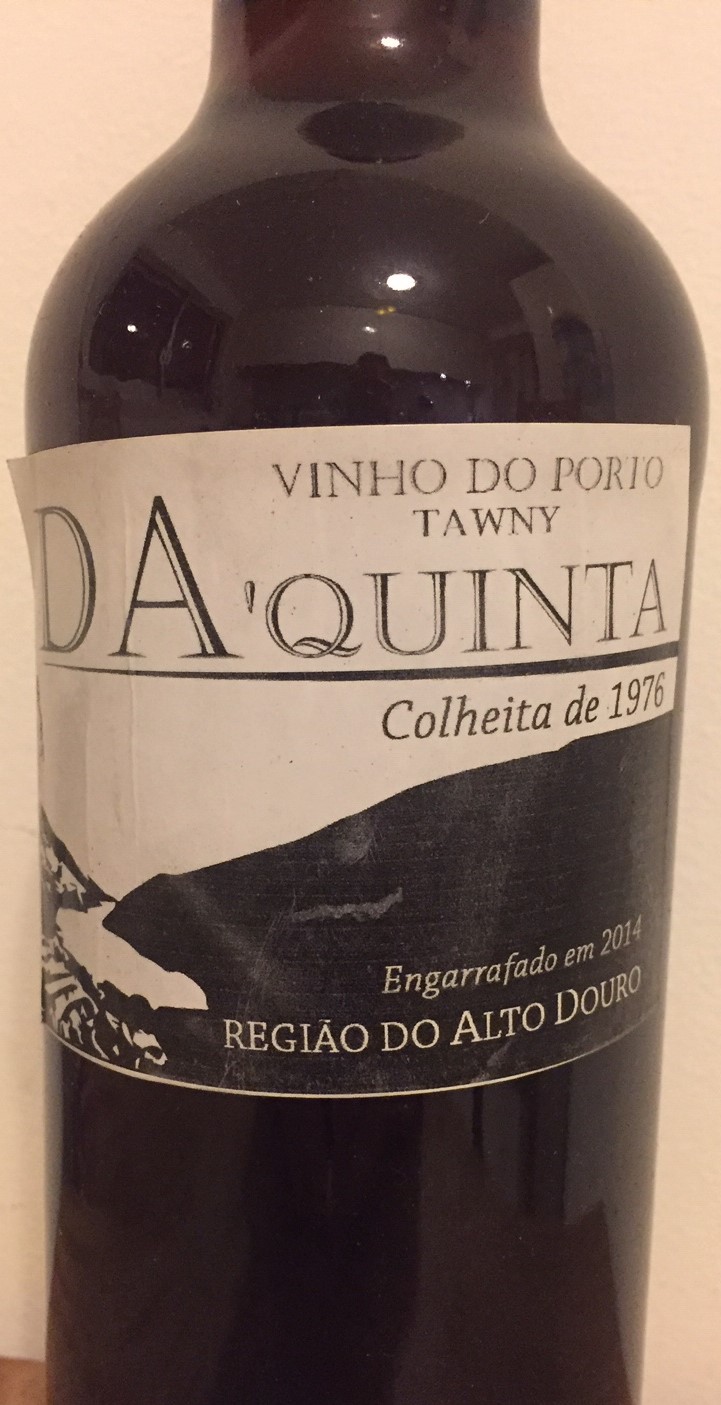 by AHB
I love it! Judging by all the standards but one, it is clearly a fake.

The one standard which redeems it, is that it was properly and fairly priced for what it claims to be.

My thinking on the fly is this:

The label is homemade nonsense, though such (poor) quality is hardly unusual in the unregulated (by the IVDP) market in Portugal. The question is whether the contents are what the label claims, which is something that I most certainly am not in a position to judge with anything approaching precision - despite having guzzled an awful lot of tawny over the last three or four years, to the detriment of my pocketbook. I suppose that another question would be this: if one was bottling a tawny that was younger than the year claimed on the label, why pick 1976 as the year of production? It could be the arbitrary choice of an idiot attempting to fool other idiots (e.g., me). It would presumably not be the act of a forger with some knowledge of those years which would be more appealing to the occasional port drinker. For instance, the bottler could just as readily have put, say, 1977 on the label. In opting for 1976, he could in principle have been targeting fans of the 1976 Krohn colheita, though such aficionados would, as a general rule, not be wasting their time perusing the wine offerings on custojusto.pt. It may - just may - be that the contents are what is claimed on the label, that is, the product of a farmer (or his heirs) trying to turn an old barrel or two into a few bucks.

My point is that there are a range of possibilities in cases such as these and, indeed, chicanery can rarely be ruled out entirely. As you grasp, the fun lies in taking a punt that something drinkable, with a few years on it, might be had for a few shekels.
All times are UTC+01:00
Page 1 of 1
Powered by phpBB® Forum Software © phpBB Limited
https://www.phpbb.com/