[Having to get the title right here rather spoils the surprise in the story but never mind. Editor, please could you tidy as you see fit, and move stuff around as necessary - I hope folk will find the entry interesting and useful...]

My family and I were invited by a long-term friend and known port-lover Patrick Hunt to join his family for a New Year’s Eve party. Given that they live over 200 miles away in North Yorkshire, we agreed to travel up on the 31st and return a couple of days later. We took a reasonable selection of drink with us, the highlight being a bottle of Graham 1983.

Arriving mid-afternoon, and allowing a bit of time to settle, we set to talking about wine options for the evening at around 4pm. At this point, Patrick introduced us to his “bonus bottle”…

Patrick’s grandfather, James Humphrey Seager Hunt, was a wine trader who passed away a while ago. While sorting out the cupboard under the stairs, Granny Charlotte came across a few interesting bottles, which she passed on to Patrick. Among those bottles was a port – a Quinta do Noval 1963, and this was Patrick’s bonus bottle. The question was, would it be fully appreciated by all of the guests, deep into the evening after several bottles of wine and beer?

While we were mulling this over, I took a closer look at the bottle, and spotted something at the bottom that Patrick had missed – a small white banner at the foot of the label stating “NACIONAL – PRODUCED FROM PRE-PHYLLOXERA GRAPES”. Oh My Goodness!!

This prompted predictable and considerable excitement as well as some soul-searching, before Patrick decided to postpone opening the port until at least the following evening.

That night, we attacked the Graham 1983 well into the evening. It was a fine wine, quite spicy for such an old port but still full of fruit and toffee, too, but I think it’s also fair to say that it slipped down rather inconspicuously, and the decision to postpone the Nacional was vindicated.

On New Year’s Day, a lazy morning was followed by an active afternoon, hiking around Hackfall, just outside Masham (recommended!). Back home, Patrick and his wife decided that they wanted to drink the port with my wife and me, so at 4pm we decanted it.

For context, I should add here that I (predictably) have little experience of Noval Nacional, having tasted it only three times previously, and that it has not surpassed itself on any of those occasions. I had some NN70 with Julian Wiseman in April 2004 (it was too young), a NN85 with Julian in March 2007 (sadly, it ranked 14th out of 14 for me in a 1985 horizontal), and a NN66 at the Deeper Underground (1966 horizontal) tasting in Jan 2008 (I ranked it 3rd behind Fonseca and Taylor). Therefore, I went into this tasting knowing the wine was rare and valuable (see later for further detail on that) but not necessarily realising what was about to unfold.

The “Screwpull” style corkscrew that Patrick used was not the best (the thread was simply not long enough), and it only lifted half of the cork, necessitating some fiddling around to get the balance of cork out. Unfortunately, that disintegrated, but we filtered the port through a fine steel filter (without any paper or muslin) and that seemed to catch the cork debris, while the sediment remained in the bottle.

During decanting, the port looked unusually pale, midway between red and brown in colour (though with no signs of any purple youthfulness). There was a hint of pear drops during decanting, as well as notes of spiciness and pink peppercorns. For me, the port had a gentle and subtle aroma, especially in contrast with the Graham 1983 the night before. There was a sweet toffee aroma with a fruit-filled background.

It would have been rude not to, so we had the smallest of sips of the newly decanted wine. Wow! That was the softest, sweetest, longest port I could ever remember tasting. So many flavours, going on and on – you only needed the smallest sip for an enormous flavour experience. The sweet notes of toffee and caramel blended beautifully into the fruity flavours of strawberry, blackberry and many others. With much excitement, we set it to one side and prepared dinner.

Four hours later, dinner was finished. A splendid, warming and tasty homemade lasagne with peppers salad and garlic bread had been washed down by the four of us with one and a half bottles of Chateauneuf du Pape, and we were ready to get back to the business of port tasting.

In the decanter, the first thing we noticed was how much darker the port seemed than when it had been decanted. I somehow doubt that it actually darkened, but Patrick and I independently noted that it had apparently grown much darker, now looking almost black in the decanter. We’d be interested to know if anyone has noticed anything similar before?

The taste now was at least as good as it had been earlier, and so incredibly mellow and long-lasting. We noted toffee-fied fruit, blackberry crumble, liquorice, vanilla, blackcurrant, tayberries. Just a smidge of tannin, suggesting it might last a bit longer, but surely it can’t get much better than this. In the round, the everlasting flavour was a perfect balance of the three dominant styles I notice in ports – fruits; sweet toffee and caramel; and spiciness. Every mouthful was a long and lingering delight.
We finished the port around 22:30, six and a half hours after decanting. The later sips seemed to be just a bit spicier than previous, but also a bit sweeter, and with the occasional hint of mint. But still, incredibly enjoyable.

There is a small and probably insignificant epilogue to this story that I nevertheless thought I would share with you. My knowledge of the value of ports such as this was undoubtedly hazy, and turned out to be a fair bit worse than I imagined. Using some slightly suspect maths, involving my estimation of the value of a mainstream 1963 vintage port and then scaling it by the small fraction that is the Nacional acreage, I thought that the value of this 1963 Nacional would be several hundred pounds, perhaps as much as £500. When Patrick texted us while we were driving home to say that we should “add a nought” to my estimation, we were so gobsmacked we didn’t know what to say – Oh My Goodness? Sorry? Thank-you!? To his eternal credit, though, when we called on arriving home, he simply said that it would have made the decision more tricky for him, but that he was happy with his choice.

Needless to say, while we felt rather embarrassed about the turn of events, we were delighted to receive this vote of confidence. And I guess that a bottle of port that is truly enjoyed between good friends is probably getting the best use, for that is what port is for, isn’t it?

Some pictures, if I can manage (and it looks like I can, if not vertically): 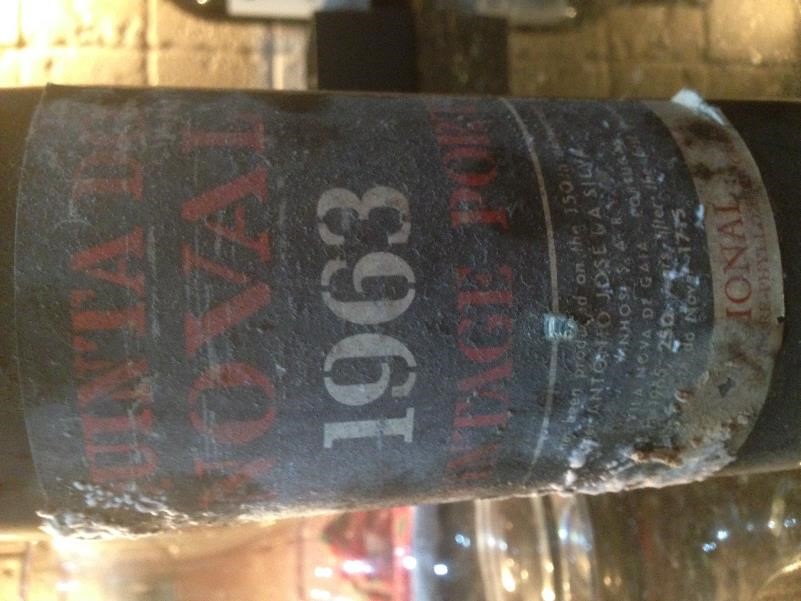 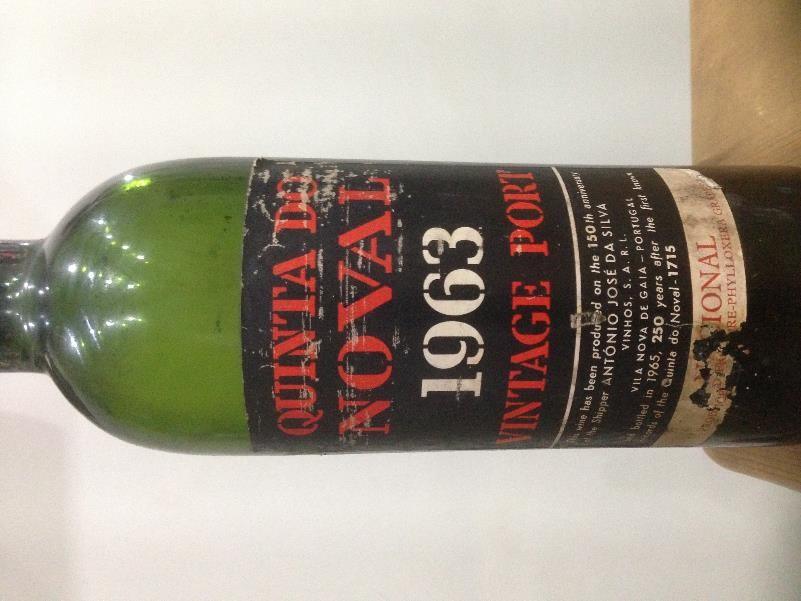 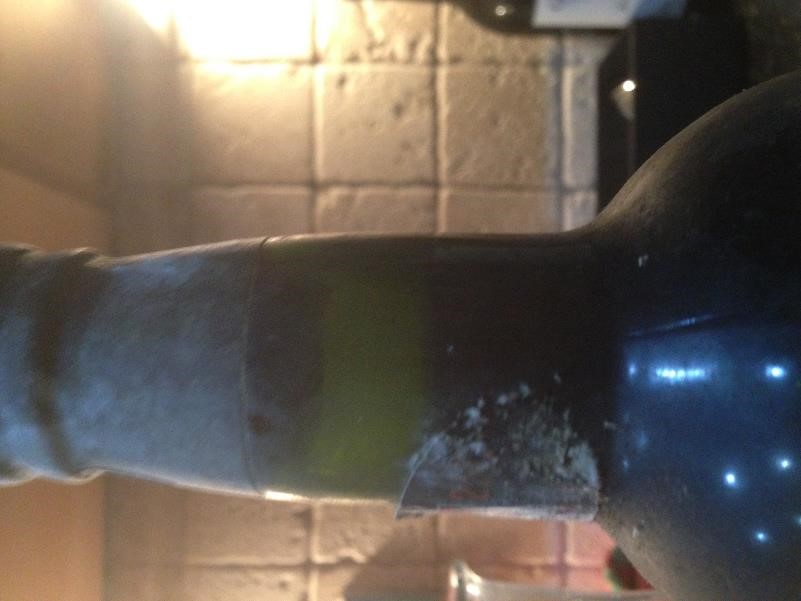 A man who likes vintage ports, and we're not talking Carthage
Top

That is a wonderful story. I have witnessed ports darkening with time in the decanter so I don't think you were imagining it.

Your general experience of mature Nacional are similar to mine in that some of them simply do not deserve the reputation this wine enjoys. It is not until you taste one like this that you can comprehend what all the fuss is about, and that it is thoroughly justified

NN63 lives up to its reputation. And you were there. It sounds excellent.
Top

That's a wonderful tasting note and a fabulous story. When on form this is a stunning bottle of port - and it sounds like yours was certainly on form. I'm so glad it was shared by four people who really enjoyed it and appreciated both the rarity and the quality of what they were drinking.

2016 has got off to a great start for you. With that early luck, I have to ask if you have you bought your lottery ticket yet?

Glorious! Yes indeed that is what wine is for and Port moreso.

I was treated to a 1995 Y'quem this New Year's Eve just gone, brought by a friend as he knew that I liked wine. Different order of magnitude yet a similar sentiment was shown.
Top
Post Reply
6 posts • Page 1 of 1