Magnus was scheduled to attend a conference in London and organised to bring some bottles out of storage in the interest of doing a "health check" on them.

Many many thanks to Magnus for his generous invitation to review some ports he has in storage. Also thanks to Ian and Tony for additional bottles.The simple conclusion for the "healthcheck" was that many of the ports are in superb shape. The 1985s were some of the best I had tasted, G70 was in superb shape. W80 as usual looked like it had been harvested last year. RP94 also very tasty and drinkable.

WOTN by some distance was the G70. Some ports received few if any points, yet they were fine examples and thoroughly enjoyed.
Last edited by flash_uk on 14:33 Fri 20 Apr 2018, edited 1 time in total.
Top

scores and guesses for Ian's bottle: 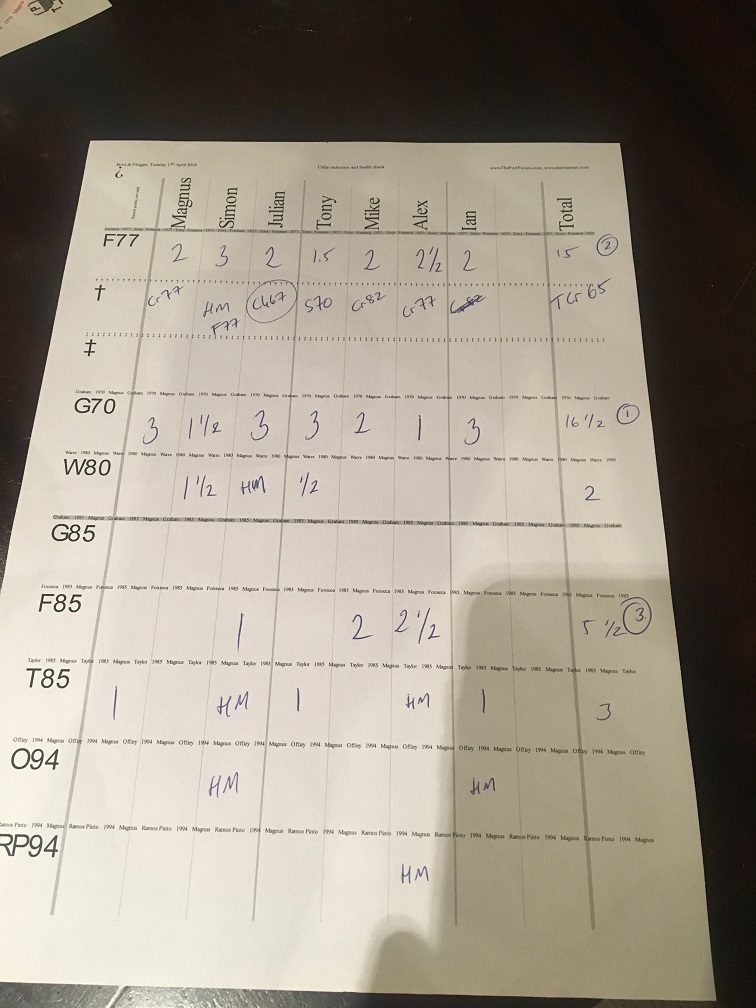 First of all, thank you Mike for creating the tasting note threads and also this review thread! I should have done it but I have been swamped since I came back. Thank you also to Alex for getting there early and starting the decanting, laying the table etc. as well as Julian for booking the room, printing and so on. Also, thanks to Tony and Ian who sagely concluded that additional port was needed and therefore brought a bottle each.

It was great to meet you all over some rather decent port and sumptuous food. Some i recognized and some I met for the first time (Ian, Tony and Simon) - nice to be able to put faces to (user) names.

About the ports then; G70 just about pipped F77 to the post, both very fine. I preferred T85 to F85 for the bronze but the group did not. I think I tasted F85 shortly after it had been poured when it was still a bit closed and not very welcoming. T85 on the other hand was raring to go from the outset. Among the also-rans some interesting ports which would have been enjoyable on their own, although G85 was not on form. Simon identified vinegar which Alex expanded on, which was obvious even to me after having been told what to look for.

I quite liked RP94, I thought it was fresh tasting but still young, initially with a good dose of dusty tannin even. OBV94 did not impress me at first, there was a funky smell - kerosene was the closest I ever got to a definition. Whatever funk was present at first dimished as the evening progressed. Finally, the F77 almost lived up to its stellar reputation. A brilliant port no doubt. Ian's T65 Crusted (served blind) was mature and pleasant.

About the health check (a good excuse to open multiple bottles in good company): I can only concur with Julian who wisely concluded that G70 drinks wonderfully well but is not going anywhere, Taylor 85 drinks well whereas the other 85s can be held back. The 94s show promise but are not yet ready.

Finally, a big thank you to all who kindly donated an evening of their lives to sit around a table full of interesting port and good food! Who's up for another health check in a few years time?
Top

A huge thank-you to Magnus for giving of us some clearly suberbly stored Poirts ( a few of which-the W80 in particular, seemed to be in a sate of suspended animation!). Interesting to note that on this showing the F85 and T85 seemed to have flip-flopped in terms of evolution (the latter now coming across as the more evolved). As noted in the scoring, it was a close run thing between the G70 and F77 with both, fine examples of these bottles. The 94s were an interesting match-up in that (as Magnus alludes to) the RP was more accessible earlier but the OBV opened out in the glass over the course of the evening (resulting in a HM from me) and I suspect will have more staying power in the long term than the RP.

A very enjoyable evening with good food and good company and whilst I harboured some hopes of getting away a bit earlier than normal (as others managed to) faced with the thought of having to leave behind a consequential amount of Port on the table, it was left to Mike and I to try and do our duty (I actually ended up getting in later than usual)!

Great to finally meet Magnus (our paths having not managed to cross on previous tastings). Looking forward to the next cellar reduction