Body still quite fruit-forward but soft, and a little jellyish. The fruit quite pleasant, not too blocky (though a little), nicely dry, with light sour cherry bitterness... alcohol fairly well integrated, but a little detachment of fruit and spirit nonetheless. No long aftertaste, little in the way of tannin; perhaps less in the mouth than the nose. A good unfiltered LBV of the same age could give it a run for its money - it’s probably at its best right now. But a very good, velvety mouthful, quite unexpectedly served by the glass at Bar La Lune, an excellent wine bar in Gothenburg which favours Jura wines. 135kr a glass. The bottle was open perhaps 6 days (opened between Christmas and new year, but they were only open on Saturday I think) but kept in their wine-fridge. I didn’t expect much when offered it but was very pleasantly surprised.

This was first tasted after a traditional Valdobbiadene Prosecco, a vin jaune and a ‘Maximus’ from the Aveyron (I think a blend of Fer Servadou and Syrah). We then went elsewhere for dinner (roast pork and kale, thank you for asking) but I promised to return for a glass of the SW and made good on this. 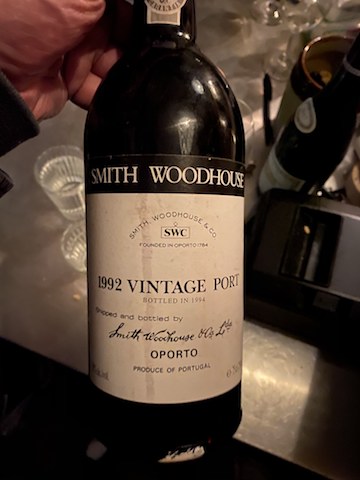