Vintage Wine and Port are running a Virtual tasting with Chris Blandy from Blandy’s Madeira with a tutored tasting his delicious Madeira wine on YouTube live at 7pm on Thursday 19th November 2020. See the link below to buy the Madeira (£49.95)from VWP for the tasting.

Have just placed an order.

Rude not to... count me in (order also has been placed)
Top

Thanks Simon. Chris (Blandy) is a very charismatic presenter and the idea is to introduce a new audience to Madeira starting with a fairly basic introduction to the main styles. If we run on from this one perhaps progress to colheitas and then Frasqueiras?

Any excuse for an after party....
Top

Ordered. If you want placemats, instruct and I will oblige.
Top

Interest seems to be mounting and I think a placemat would be very useful. So if you can oblige it would be much appreciated.
Many thanks.
Top 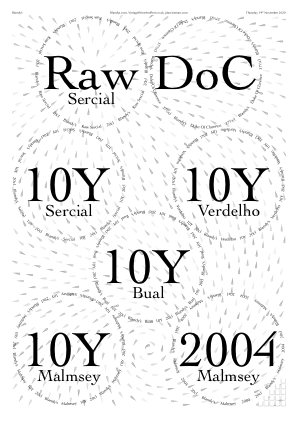 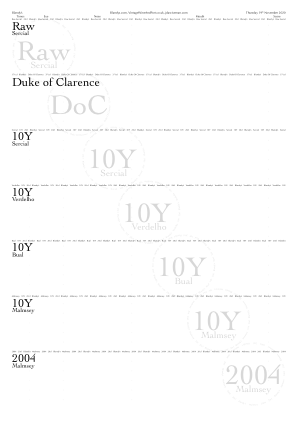 Of course not - many thanks
Top

Just received my tasting pack today-great vfm and looking forward to it!
Top

Looking forward to this tasting tomorrow. I am hoping that we will gather for an after party debrief. Is there a kind soul that is able to facilitate a zoom gathering to celebrate our new knowledge of Madeira?
Top

I should be able to. I need to buy a month's pro subscription so I can run the la Rosa tasting next Tuesday. if I buy the subscription today I can facilitate a post-Blandy's Zoom lock-in.

Me too please! I can also facilitate a zoom call if needed.
Top

Invite sent, let me know if anyone who has requested it hasn't received it.
Top Ports in 2021: Niepoort Garrafeira 1931; Niepoort VV (1960s bottling) and Cockburn 1969 Single Harvest Tawny

I think I mentioned this to AHB but since I somehow managed to persuade 4 pairs of friends to take part, we'll probably arrange our own after party to avoid it being a takeover of the

one. Next time, hopefully!

I’ve talked my Mum into joining Nuala and I so I won’t be able to join you afterwards. We’ve got the TV lined up to watch the tasting from our dining table with a full spread of food as suggested by Tony. See you all at 7pm.


Sent from my iPhone using Tapatalk Pro
Ben
-------
Vintage 1970 and now proud owner of my first ever 'half-century'!
Top

I’m afraid that I cannot join the afterparty. Looking forward to to the tasting, though!
Top

Lovely wines, great presentation and I now feel I understand the Madeira sector so much more. Thank you to Chris, Tony, Claire and all at Blandy's and VWP that made it happen. I hope there will be more tastings like this. Many thanks.
Top

This was good fun. Thank you to everyone involved in arranging it. It certainly made me want to visit the island again!

@ JacobH - I'm going to be spending most of January in Madeira. Since the 1990s I have usually put in a week or two there in January but England is so grey and miserable at the moment that this time I am intending to be there almost the whole month. It will make virtual hearings more bearable.

- Madeira generally has much higher acidity than port which balances the sugar. Blandy's, though, is definitely at the sweeter end of the madeira market, especially the cheaper wines.

- Verdelho, Terrantez, Bas**do and Bual are where most of the interest is. Sercial needs to be fermented fairly dry and then kept at least 20 years in barrel to be really interesting and Malvasia does not have enough acidity to make it interesting save in special vintages.

- I've never had raw Sercial in 25 years of visits so I'll see if I can get to taste some this trip, thank you for the tip!

- the IVBAM (the B is for embroidery, go figure) is not in my view a helpful organisation. I agree there are too many categories of wines. And many of them too are not what they say they are. I think the IVBAM should insist that the contents of each wine bottle are 85% minimum the grape it says it is and 85% minimum the age it says it is. But the boat has sailed on that one, save for the colheita and vintage wines. The '10 year old', '20 year old' etc. categorizations are wide open to abuse; and are widely abused. The only ones of those I have repeat-bought are the Henriques and Henriques 15 year old Verdelho and 20-year old Terrantez.

- Blandys on the island caters mainly to the tourist trade (their lodge is a standard stop for cruise parties) and so their serious vintage wines while very good are much overpriced. Their true values can be found in the UK auction market. [Watch out for fakes though even at the most reputable auction houses - the auction houses don't see enough of them so may not be able to spot them; but I can. ]

- There are no bargains in madeira any more- prices for a given wine, say 1968 Bual, are about 7 times what they were 25 years ago, whereas port prices for similar vintages are only about 3 times. The best value retail now is to be found in the Perreira d'Oliveira wines from the 1980s and early 1990s, often comfortably under a hundred quid and many good and some outstanding (e.g. 1988 Terrantez).
Top

I disagree that Malvasia doesn't have enough acidity to be interesting - Malvasia is my favorite Madeira, with Blandy's and D'Oliveiras being my two favorite producers. I stay away from Sercial and Verdelho as they are too dry for me, but do like older Terrantez and some Buals.

Note that much of the style of the noble grapes is tradition - I was at a tasting with Ricardo Freitas where he served an 80 year old Sercial that had over 300 g/l of sugar. But its acidity was off the charts - 50% beyond what's allowed to be sold by law - and so it presented as a dry wine and is a component in the RWC Charleston Sercial.

Madeira is my "I only want 1 glass tonight" wine. It is virtually indestructible and remains nearly unchanged after months or even years of the bottle being open on the cabinet. So if you feel like a glass of wine but don't want to open an entire bottle which might deteriorate before you finish it, have a glass of Madeira and just put the bottle back on the shelf for later. I have 7 bottles open right now, one of which is now an experiment because it has been open 11 years. 3 others have been open for 5 years (IIRC). The stuff never goes bad.

Note: Terrantez is only sort of the "middle" noble grape. It can run from nearly as dry as Sercial to nearly as sweet as Malvasia, so it is the one you most need to have tasted a bottle before you buy it. It's also easily the rarest and nearly went extinct on the island, but has been brought back and is again being produced by the larger producers.

Prices have definitely shot up on the last 10 years. I remember when the 1875 D'Oliveiras Malvasia Family Reserve was $300... that was only 2010 or so. It's now well over $1200 if you can even find it. But it's an amazing wine, and since it is a Madeira you can open it for a single glass, and then drink it one glass at a time on your birthday over the next 10-12 years. (A friend did exactly that with a bottle.) So you can think of it as $120 per year for 10 years as a birthday celebration.

Glenn's response happily demonstrates that there is a madeira for every palate, which is one of the most pleasing things about it.

Malvasia not being generally to my taste I have only four bottles in my Madeira collection;

- a 1996 Colheita from D'Oliveira's; which is much more to my taste than the same producer's 1991; my point again about the level of interest for and in Malvasia being variable- I agree with Glenn though that their 1875 Malvasia is truly astonishing stuff;
- a gaudy 1960s Blandy's bottling that's probably heavily cut with TNM;
- a 1936 from an unknown producer; and
- an undated C19th Leacock which is one of the last bottles I have left from the sale of William Leacock's cellar in December 2008. I extracted a bonus from my then head of office by explaining I simply had to have one because otherwise I wouldn't be able to afford to go large at this historic madeira sale; he thought this was terrifically funny and was (in retrospect remarkably) generous; I blew it all in one glorious hour.

If it's not obvious, I love the stories around the wine, as well as the wine.