Nacional 1962, Nacional 1980, and Nacional 1985 were tasted in a further celebration of the birth of my first child, Sophia Wiseman. Present were myself and the missus, and friends BAW ODM TZ SGO'S and RO'S; the first of these bringing some fines cheeses.

All were decanted at about 3pm through muslin, and we started soon after 6pm.

The 1962, the darkest of the three, had both bitterness and sweetness in both nose and palate. The bitterness was hard to pin down precisely: "an unlit cigar", "leather", one suggesting "the bitterness of coffee". I am sure that the sweetness was Gales runny English honey; though others preferred "caramel". It was long, but the taste at the tail of the length was far weaker than that of the 1980.

The 1980 was unremarkable when first in the glass: pale and the palest of the three; with no noteworthy features to the bouquet. But so long, and so mouth-fillingly huge in the palate, and peppery. Five minutes later the nose had so much passion fruit. I have never had port like it: the passion fruit is overpowering and utterly delicious and all over it. The passion fruit lasted all evening, and was present even when the glass was freshly refilled. If any readers know by what process it appears after the delay, please share. A great port.

The 1985 was the least pleasing, having the same hard-to-define off note, in both nose and mouth, as the ordinary (and cheaper!) Noval 1985. The off note, again like the N85, faded to mere roughness. After half an hour, by when our judgement might have started to become impaired, there was some of the passion fruit, but to nothing like the same extent as the 1980. Again, I find myself disliking what Noval did in 1985. (However, Sophia liked the 1985 more than the 1962 and the 1980.)

I would like to give a report on how these three developed over the next twelve hours, but there were seven of us and only three bottles, so I can't.

Finally, a question about the labels: does anyone know why the 1980 was relabelled, and in a manner so ill-keeping with the usual Noval labelling? 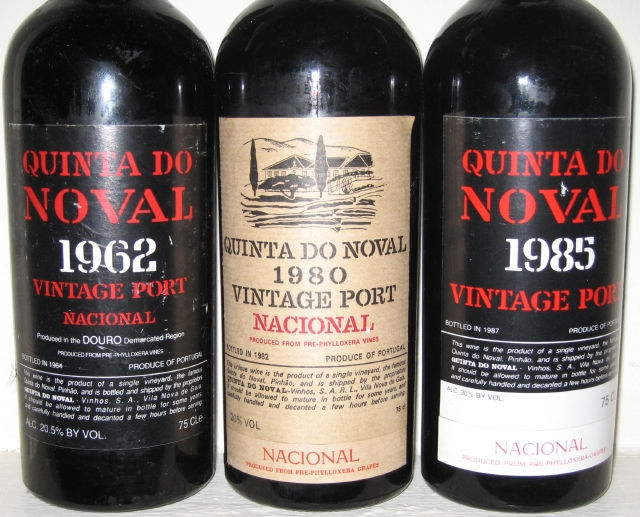 Great read. I personally like reading these types of 'reviews' more than just Tasting Notes alone.
No idea about the 80 Label, but it does look odd. Suspect an American salesman might be involved in that one. Like them rather naming Port Harveys, instead of the suggested Latino Brand 'Martinez', which got a very poor press in the USA of the 80's. (I'll leave the implied racism there)

I know you'd miss the posts that follow your article on another site, but I'd have reproduced your Original here and let it have a life of its own. But each to his own.

I don't think there is anything wrong with inserting links to other sites in these threads. It helps create a network of sites with similar interests and can only serve to broaden the community here and elsewhere. Perhaps some links in your original thread pointing people here would complete the circle?