On Tuesday 8th November 2011, in The Steak Exchange EC2A 2EH, friends gathered to note the return to London of jdaw1, and the recent birth of his second daughter. The theme was ‟Port With Star Quality”, with appropriately themed placemats.

I should probably post tomorrow, when I am less affected by the port that I have consumed. However, that doesn't change the fact that this was a wonderful evening with super company, a terrific theme and some magnificent ports. My personal favourite was the Taylor 1977 but this was given a serious challenge by the Croft 66 and the Fonseca 1970.

Very sorry to have missed it (and not just because of the port!!) 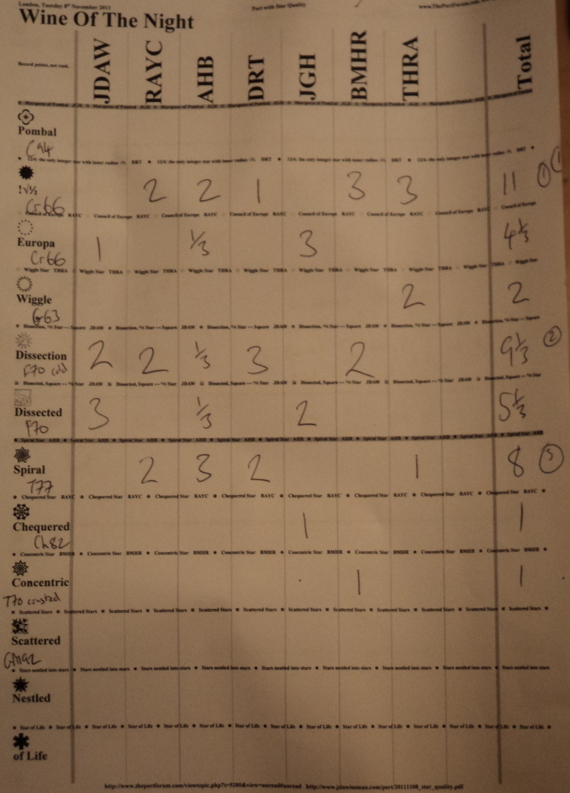 and I was stuck here with only one bottle. Superb notes. Sorry to have missed this.

Sounds like a good night, my apologies again for having to drop at the last minute. I'm not surprised to find that along with the good company that there were some very nice ports. My first instince given the theme was to plan to bring an F70 myself (my favourite port), but as we'd had it recently (at the matrix) plus based on his previous 'shoe-in' post and the theme I guessed that Rob might bring a Cr66, so instead I'd planned to bring a W66 for a mini-theme if I was right; another time perhaps. Glad it sounds like it was (of course) and excellent night, and hope that circumstances this end will allow me to be present next week.

It was a very good night, with a deeply impressive level of gluttony and thirst for port on display across the board. By the end i had been drunk under the table by the others, which is not something that happens often!

I was very impressed by the Taylor 77, which i predicted would be my WOTN early on. As it happens, any of 5 of the glasses that i subsequently tasted (F70x2, Cr66x2, G63) had a good stake to that claim for me - testament to the quality of ports that evening and i am grateful we could agree on a fudged voting system to accomodate 3 equal picks (or, in AHB's case, 3 equal choices for 3rd place!). Since i have previously been underwhelmed by my post-1955 Taylor experiences and equally underwhelmed by many of my vintage 1977 experiences - I am very glad to be given this cause to re-evaluate (particularly in view of the relatively poor Taylor and vintage 1977 showing at the Matrix tasting).

Many thanks to jdaw1 for opening a prized magnum of F70 and conducting a very interesting decant experiment. Not only did none of us pick it (at least initially), but i think that there was even disagreement about which glass tasted more mature! This port is fabulous now, but i don't think it is yet at its peak.

The Croft 66s were also interesting - this is the second tasting in a row where duplicate blind ports have been brought - again, I don't recall anyone being anywhere close to spotting them! Both were a very nice drop indeed. 66s are my sweet spot at the moment.

Overall, a very successful evening. Though, since one bottle per person is clearly never enough, perhaps we should in future pre-agree in the organisation thread whether a modest bottle of VP should be decanted as an extra bottle to avoid the late-decant scenario that we had with the Malvedos and Cavadinha 92s...
Rob C.
Top

I like the voting method btw. While probably not planned that way, the effective system of "each person allocates a total of 6 points in any way they please across the ports, subject to a maximum of 3pts to any one port" seems like a simple (provided no-one goes too far with fractional points), yet flexible way to allow representation of WOTN while taking equally good wines into account.
Top

I will eventually get round to writing up my tasting notes from last night (or was it the night before last?) but I did manage to take home a sample of the Malvedos 1992 which I drank last night (so it must have been the night before last). It was extremely impressive; the extra 24 hours of air contact did it the world of good and moved it up towards the lofty heights of some of our leading contenders for WOTN - just needs another 20 years of cellar time to reach that level of maturity!
Top Ports in 2019 (so far): Cockburn 1947 and Quinta do Noval Nacional 2017
2018 Ports of the year: São Leonardo 1927 White Port (Bottled 2018), Quinta do Noval Nacional 1994
Top

PhilW wrote:I like the voting method btw. While probably not planned that way, the effective system of "each person allocates a total of 6 points in any way they please across the ports, subject to a maximum of 3pts to any one port" seems like a simple (provided no-one goes too far with fractional points), yet flexible way to allow representation of WOTN while taking equally good wines into account.

Your interpretation of the voting is itself a very good proposal: 6 points any way, subject to a maximum of 3 for any one candidate.
Top

A splendid evening indeed. The theme worked out perfectly and the wines produced were fantastic.

Thanks to everyone in attendance for their company and for sharing their star quality ports. If my tasting notes ever turn up I will be sure to post them in the appropriate threads

I did so collect, and reported here the consumption of ☆.
Top
Post Reply
13 posts • Page 1 of 1