A small emergency, with a theme of Young Port, at the B&F, preceded by beer at The George.

Beer was had, then young Port was had. All very splendid. And the Sandeman 2000 was the favourite.
Top 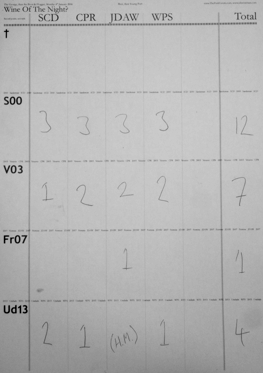 “(H.M.)” = Honourable Mention, a new scoring device. Adds zero to totals, but feels worthwhile. Maybe this should be MiD = Mentioned in Dispatches.
Top

An early January 'Emergency' to get 2016 going, and what a splendid way to start the year it was. Having met Julian in then George he soundly beat me at his self invented hexagonal board game (which was a cross of monopoly and chess), and this was followed by a lesson in whist, where I was once again trumped! On a more pleasant note, we had some good beer, and a nice bottle of Faustino 1 2001 Gran Reserva Rioja. It was then off to the Boot and Flogger to meet with Charles and Wolfgang for the main event. Some lovely young port was had, including a first taste of the Unidade 2013 which was a very lovely port which I am looking forward to seeing develop over the years. To round of proceedings we also had a bottle of Warre 1970 from their cellars which was a very enjoyable contrast to the young ports. Good fun, great company and a fantastic start to 2016.