Links for a tasting of Fonseca Guimaraens, interspersed with some Fonseca, at the RAF Club on Monday 4th April 2011.
Top

Disclosure: Distributor of Quevedo wines and Quinta do Gomariz
Top

The expression 'marathon, not a sprint' comes to mind! Having, unusually, arrived home with notes and 'sample' (more of this later!) bottles intact, I have to say it was an excellent evening. A big thank you to Adrian Bridge for kindly helping with the sourcing of bottles, and to various attendees who then took up the mantle to fill the few remaining gaps we then had from an original line up that was already pretty impressive. I am not quite sure at what point everyone decided to start contributing additional bottles, but it was a Guimaraens horizontal that spanned most prodiced vintages from 1933 - 2005! Oh, and a few classic Fonseca vintages thrown in for good measure!

I shall report back on the new alternative to sample bottles tomorrow, when I have sampled the transported wine.
Ben
-------
Vintage 1970 and now proud owner of my first ever 'half-century'!
Top

A monumental tasting by any measure. Great organization and execution, and the wines did their part as well

I thought the overall quality of Guimaraens to be quite respectable indeed, though the classic Fonsecas are clearly a step above, in my view, with 1970 being a sensational wine, and both the '85 and '00 holding great promise for the decades ahead. Still, the consistency of Guimaranes must be praised, as it is an attribute that is fairly rare in wine, and especially so when evaluating a 70-year performance history.
Top

Chris Doty wrote:the consistency of Guimaranes must be praised, as it is an attribute that is fairly rare in wine, and especially so when evaluating a 70-year performance history.

Absolutely true. What struck me about this tasting was the consistency in style over such a long period of time. There were a small number of wines that didn't show well, but the vast majority of these wines were very obviously from the same mould. This was a stunning demostration of what VP is all about, "declared" or not.

Big thanks are due to those who very generously donated wines to the line-up. What started out as a fairly restrained afair somehow blossomed into a frenzy of completishness that I didn't expect. I think we proved two things at theis tasting:

1. Fonseca make very, very good Port.
2. It is more than possible to taste 32 different vintages in one offline.

Perhaps we are setting our sights too low?

Sincere thanks to Ben, Derek and Ray for organising and to the team who set up this mind-blowing evening, and obviously to Adrian Bridge for making some hard-to-find vintages available and providing a wealth of information on the Fonseca house (and each port individually) at the table.

Whilst i agree that the classics had the edge, there were some absolute beauties in the Guimaraens line-up - for me the '33, '76 and '6[7] (i think - but after 32 ports and ill-disciplined note-taking cannot be sure...). A couple of very nice '80s as well.

As to size - perhaps a debate for another thread but there was slight guilt at leaving so much port on the table, and perhaps individually a couple of ports get lost and don't receive the attention that they deserve. An interesting one was the '42, which did not impress me at first tasting but seemed to improve dramatically over the evening. Unfortunately by the time i got round to retasting, i was seriously running out of steam! I am, though, anxious to see a TN for Wolfgang's personal blend of all ports from 2000 on - transported home in a grappa bottle!
Rob C.
Top

My sincere thanks to everyone for making this one of the great tastings of one producer ever assembled (well, technically two, but who's quivering over small details), I am very glad I made the long trip over for it. I've now got to get to typing up all those notes as well as the rest of the evenings activities this week...what do I need to open for such a thing? I'm thinking a Fonseca of some some vintage and type. After all they were amazingly consistent over the years as DRT mentioned and having another bottle seems like the right thing to do

The default policy at events such as these is that the votes of the industry guest are confidential. But Adrian Bridge generously allowed publication.

There follows a scan of the completed voting sheet. Note that the question was not WOTN; it was non-Fonseca (so Guimaraens or Panascal) Of The Night.
(Reminder: we records points, not rank, so a ‟3” is a first place.) 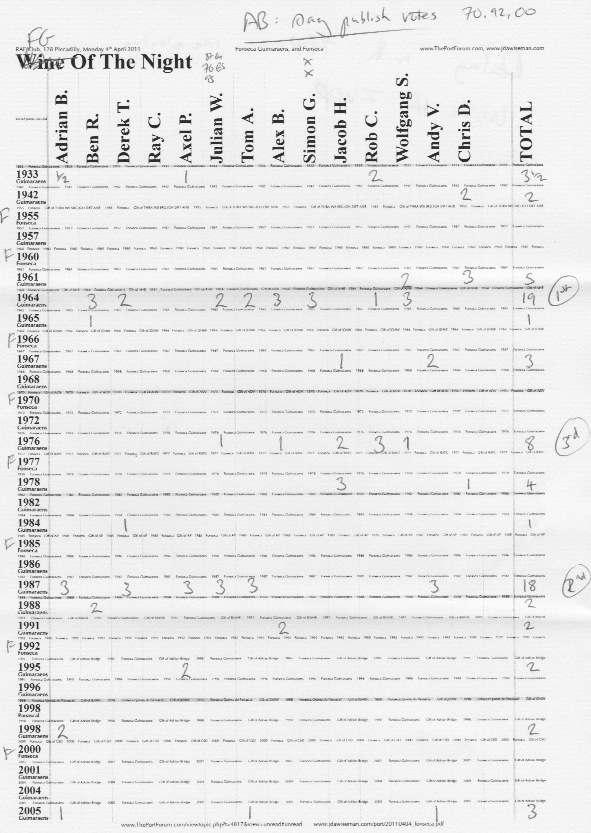 The scribbles above my name listed a first selection of candidates; the crosses above SRG’s indicate his not voting for second or third placers. Another scribble records a preference including the full blends.
Top

this was a fantastic tasting! Really high quality throughout the whole line up. Thank you very much for organising this event. Also special thanks to Derek for a mad dash to Southampton in order to get the FG 1964. For me the best FG of the night. Also I was very impressed by the 1961. Had not on the radar that 1961 was also a fine port year.
With regards to the classic vintages embedded in the tasting the 1970 really won it for me. Not only for obvious sentimental reasons

Also the 1933 and 1942 were very good indeed. Especially the 1942 improved in the glass a lot. However there was always this slightly malty sweet finish of an old wine which indicates that this port slightly past its prime. Still a very good port!
Funny was for me that we had at least two ports (as far as I remeber 1964 and 1968) which had flavours of lavendal/Garrigue which I usually anticipate more to Rhone varietal grapes. Again very good indeed.
I must say the young FG did not do it for me so much; 01, 04 and 05 were good but in my eyes not as sparkling as the old ones.
With regards to the blends I put together in order not to waste the FG ports in the glass i must say that this was nice for drinking but not really represenative of FG anymore. Also due to the ports were long in the glass before I poured them in two small glass containers and the half bt you could also taste 4 days on a slight fading.

big thanks for organising this fantastic venue. I enjoyed the ports a lot and liked the qualities of the FGs throughout.

I am so sorry I was unable to attend this tatsing...especially as I was one of the birthday boys...but unfortunately I ate something on Sunday that gave me a severe case of food poisoning that put me in hospital for 2 days as I had become very dehydrated.

I am so very grateful to everyone for thinking of me and bottling samples of the wines tasted...I have just about got an appetite for these now and have statrted to make some in roads into them....I have to say even in plastic bottles they still show quality.

I looked into the bag that Tom kindly brought home for me but could not find any evidence of the Steak and Kidney Pudding...oh well maybe just as well as I really should avoid anything that presents itself as edible and has travelled through Liverpool Street!!

Thank you again for not letting me totally miss out.

In selecting the Ports to be delivered to you we excluded few, mostly those of which our opinion was lower than the median.
Top

jdaw1 wrote:In selecting the Ports to be delivered to you we excluded few, mostly those of which our opinion was lower than the median.

{insert don't-mention-the-F70-icon}
"The first duty of Port is to be red"
Ernest H. Cockburn
Top

F70? Drunk by your neighbour, who, for this heinous offence, is to be transported for life to New Amsterdam.
Top

It was CLEARLY corked!

Obviously I was doing Cookie a good turn. The thanks I get!!
Top

This was good fun and I’m glad I just about managed to survive it...I don’t think I’ve ever started a tasting feeling quite like I did, let alone a 32-bottle one...

Anyway, huge thanks to Derek and Ben for pulling it together (and to anyone else who helped out, behind-the-scenes) and for everyone who donated some extra bottles.

I was struck by the elegance of all the Fonsecas, even from the minor years. That seems to be quite a distinctive house-trait, particularly from 1961 onwards, and something I will look out for in the future. I also found it interesting that, unlike many vertical tastings, there wasn’t much of a gentle gradient in colours, with the sheets being dotted by darker and lighter Ports.

To my mind--and it appears I was a bit out-on-a-limb with this view--Fonseca has had some really good runs of years in odd periods, particularly 1976-1978 and 1963-1968 where almost everything produced is excellent. I wasn’t so convinced by the late 1980s Guimaraens, although the 1985 classic blend is excellent.

One thing that I hadn’t previously considered was how much the release size can vary. I had assumed that products like Guimaraens were produced in very standard quantities each year, perhaps conforming to a general curve of overall increase or decrease. However, it seems to vary considerably from vintage to vintage, depending on what the grapes are like and what the company decides to do. This may explain why some vintages of SQVP are seemingly inexplicably scarce whilst others are very common.

I was interested hearing from Adrian Bridge about the blending of vintage ports, that they always start by trying to make a classic blend and, if that fails, then move onto the SQVP, and a bit more about the Scion

Help help! Were the bottles photographed? If yes, please email or PM me. Thank you.
Top

jdaw1 wrote:Help help! Were the bottles photographed? If yes, please email or PM me. Thank you.