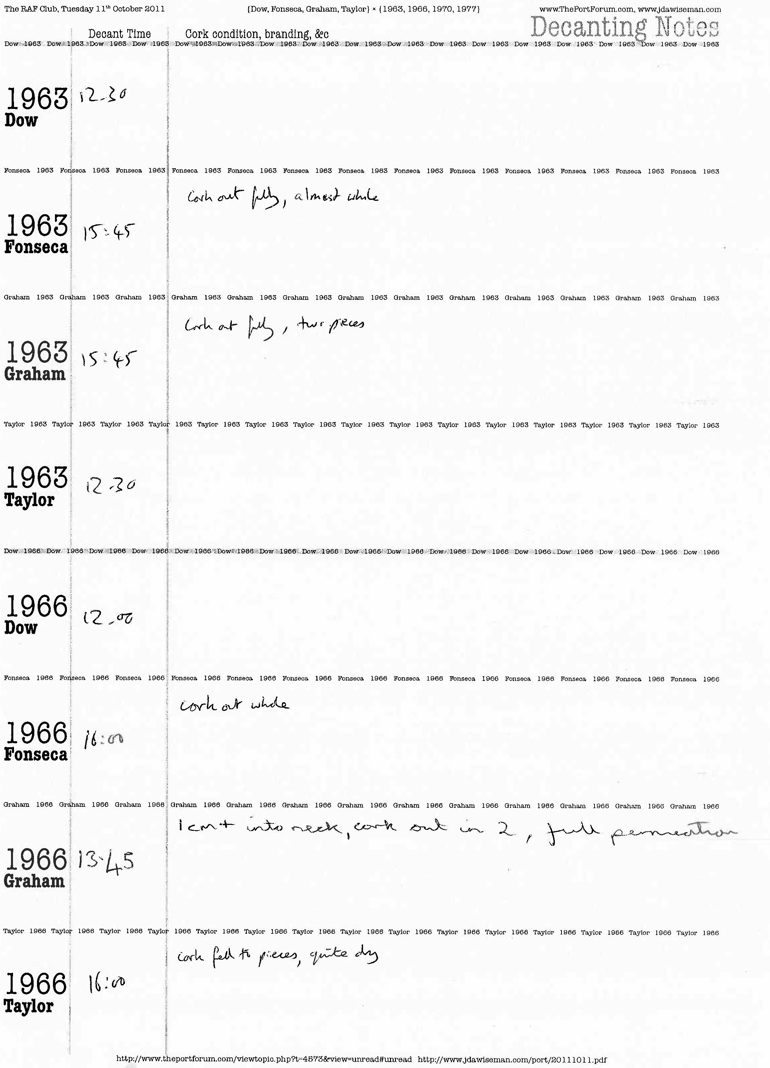 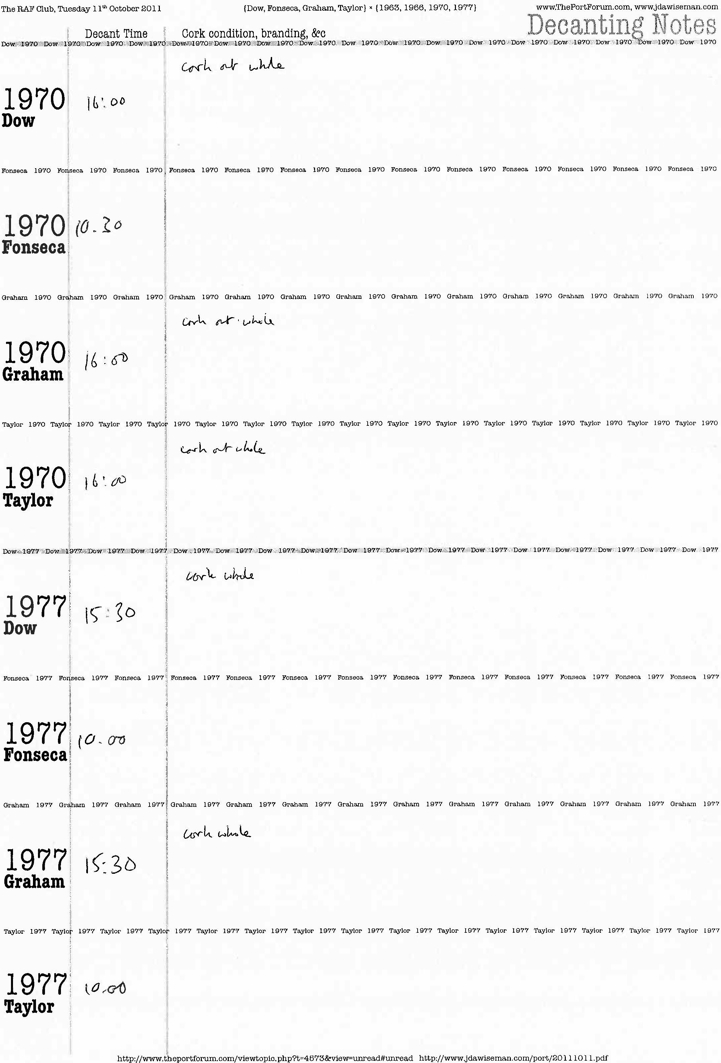 These scores were given before unblinding. 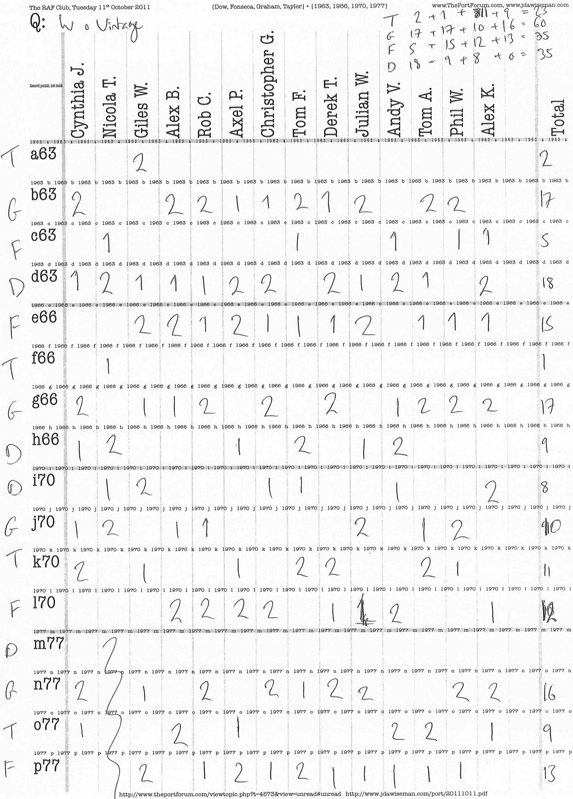 Within each vintage, first place was 2 points and second place was 1 point.

Which shipper? The guesses of some of those present. 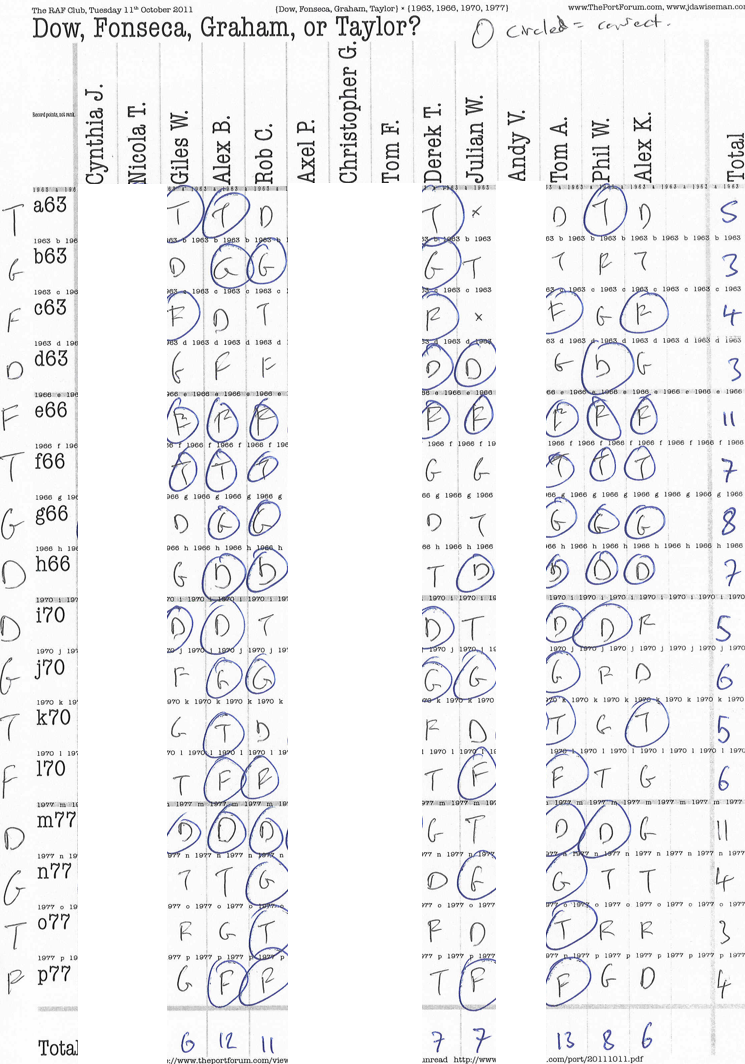 These scores were given after unblinding. 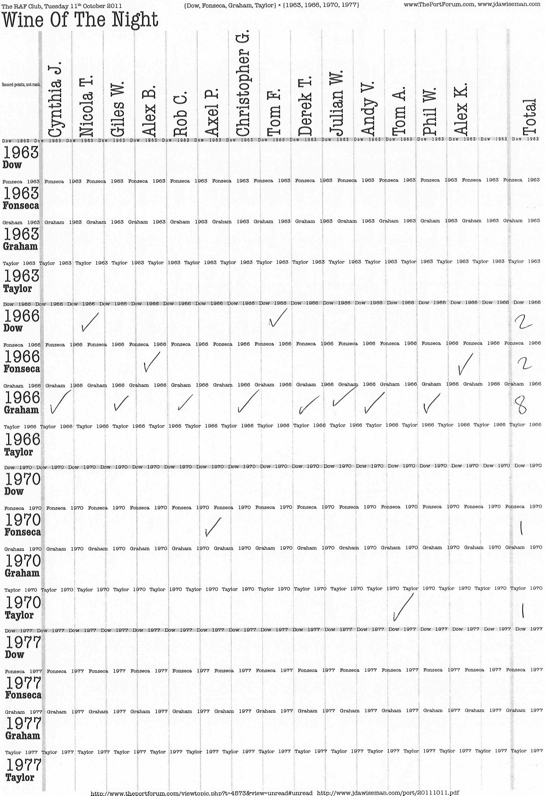 So Graham still wins by a country mile, with Fonseca second, and Dow third.
Top

Another fantastic evening, and it was great to meet Cynthia, who was a fantastic guest.

The '63s were, on the whole and aside from one offish bottle, lovely ports. This time round, however, I was not wowed by any of them in the same way as i have been before (though the Dow in particular continued to improve throughout the evening...until i ran out).

The '66s, on the other hand, were absolutely spot on for my palate (Taylor was shot, admittedly) and far exceeded my already high expectations. Taken together with the fantastic Croft '66 that CMAG brought along to TCP a couple of weeks earlier, the Warre i had last Christmas and a rather good Delaforce supplied by WS1 in Q1 2011, i now rank this as my favourite vintage for current drinking (in terms of generally available vintages, so leaving aside the '35s, '45s, '48s etc.).There was some debate about whether they were going to get any better or whether this is the pinnacle as far as '66s are concerned, but i must say i don't see them falling off a cliff over the next 10 years and that would be easily enough time for me to get through a case of Dow, Graham and Fonseca! I think next 6-8 months would be a great time for a '66 horizontal...

'70s were great - consistently great - and obviously have a long life ahead of them. Amazing that they still look so young alongside the '66.

'77s were a slight disappointment for me. Dow was corked, which is 3 for 3 now in my experience. I found the others to be slightly awkward and clearly a difficult proposition at the moment considering that the prices are so high (especially T and F). It will be very interesting to see where these are in 5 years - hopefully a better place. But currently I'd take a Warre or Gould over any of these given the respective price points. I've heard of people getting better results with G77 after a lot of decant time (48hrs+). Perhaps that's an experiment i'll try over the next 12 months.

In terms of house style, the only vintage where i had any confidence that my choices were anything more than a shot in the dark was the 70 (although it did turn out that i was wrong...). But Graham does emerge as an extraordinarily consistent house, especially looking forward through the 80s and 90s. Fonseca hits the spot nicely, and i must admit i find Dow less "dry" than it is reputed to be (I wonder if it has this reputation by default, simply because, relatively speaking, it is not as opulent as F and G). Taylor doesn't seem to do it for me in the same way as the other three at this tasting, but that's not to say that i would turn one down! Looking at the voting sheets, my mistakes were often mixing Graham and Fonseca on the one hand, or Taylor and Dow on the other

Big thanks to AHB for organising and to AHB, THRA and jdaw1 for supplying so many of the ports from their cellars.

are there photos of this event

like glasses/ personalities? =)
Disclosure: Distributor of Quevedo wines and Quinta do Gomariz
Top

A very enjoyable evening and particularly good to meet some new TPF faces, as well as our special guests. It was my first time at the RAF club, which seems an excellent venue with plenty space, facilities, good food and helpful staff.

The ports showed a marked difference in colour between the 66 and 70 boundary, with all 66 and older being light to medium, while the 70-77 were clearly much darker; the F66 being noticeably darker than its peers but nowhere near as much as the 70s. Sadly 3 of the ports were spoiled, the Taylor 63 (odd medicinal smell, minimal flavour, generally agreed flawed), the Taylor 66 (foul smelling and undrinkable) and Dow 77 (corked).

I thought the 70s and 77s didn't show as well as they might have, possibly needing longer decant times? I did take several samples home which had improved at +24hr. Overall the evening reinforced my preference for Fonseca and Graham, although I felt it was a shame that the Dow 77 was corked as I have thoroughly enjoyed that previously, and that the Graham 66 in particular was outstanding (voted WOTN by several people including myself).

Thanks to all involved in the organisation, setup and operation of the event.
Top

Having just seen the notes posted about this event, I must say I'm rather shocked to see such low scores from AHB on so many trophy ports (the 66 Graham and 66 Fonseca bottles being the only two that were awarded exceptional scores 93/94, respectively).

It seems like it was a great event, and certainly the line up was nearly flawless given its objective. Any thought as to what happened here? Just bad luck, perhaps?

Sorry I wasn't there to taste for myself!
Top

I was rather underwhelmed by many of the ports at the tasting. Some were just bad bottles - Taylor '66, for example - while others just didn't show the way that I know they can and have experienced them doing so in the past - Fonseca '63 was the classic illustration. I have had superb bottles of F63 which I have rated 94-96 but the bottle at this tasting was very modest compared to those.