A triple vertical of Gould Campbell, Smith Woodhouse and Quarles Harris, at the RAF Club on Thursday 17th November 2011, in honour of the 30th Birthday of the organiser. Links:
Top

In [url=http://www.theportforum.com/viewtopic.php?t=175&start=224]the thread on the Placemat software[/url] jdaw1 wrote:For the GC + SW + QH triple vertical on Thu 17 Nov 2011, RAYC made several similar versions of the placemats, and then overlapped the printouts to simulate the following A3 arrangement. 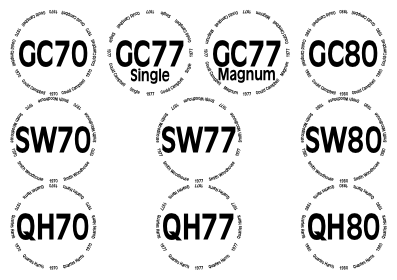 firstly big thank you to Rob and Julian organising it all and putting all the effort in. It was a great tasting nevertheless my overall impression of the evening was good but not as exciting as I hoped it would be. I was very fond of the new glass service we used. We should continue to do this despite the cost; the results were a lot better than with the RAF glasses. However still the tasting experience in the RAF club lower ground floor is somehow not as good as on the 1st floor.
With regards to the ports I was suprised to see the 85 GC + SW + QH so pale already. Also it seems GC + SW + QH had a very good stretch in the early 80ties. For me clearly 80 and 83 GC + SW + QH were very good indeed!
The 70 GC + SW + QH did not perform on the night. QH had VA and I think for GC + SW this was down to bts which were recently imported into the country and did not have enough rest. I had a lot better experiences especially with GC and SW 1970.
The 77s were very good (leaving the corked bt aside) but were also somehow closed and potentially should have decanted earlier. For me shocking was how evolved the 91s are already. On the night I did not like them and i think we need to revisite 91 and in comparison 92. This was discussed in length in

and after this experience I would vote for one of the next bigger tastings we organise should be a 91/92 comparison tasting in whatever form (tbd).
The 94s were very uninspiring and show clearly that they entered finally into the closed space.

Sorry for being late and with the promise to put in some of the TNs soon. Thanks a lot to Rob for organising a superb event. Unfortunately my favourite vintage (1970) did not show what it could so there has to be some re-tasting. Fortunately this friday we will taste the three 70s together with 21 other bottles of this perfect year side by side again

Again, big thanks to Rob, splendid event and I feel sorry for everyone who missed this.

It's remiss of me to not have posted on the review.

It was a very interesting evening, and I worked hard to be able to taste all of the wines we had in front of use before I had to dash off to catch my pumkin carriage home.

I thoroughly enjoyed being able to taste all these wines side by side - but I am no nearer to being able to spot a signature for any of these than I was before the tasting! It was great to be able try some of these for the first time.

I love port tastings and the way that they highlight how personal likes and dislikes are - unlike Wolfgang (and Axel), I loved the GC70 and had it as my wine of the night! I do agree on the point about the earlier maturity of the 1991s...but we shouldn't forget that these are almost 21 years old and therefore entering their traditional phase of drinking. But I wonder how they will last last - will they peak and quickly fade (a la 1975), or will they peak and linger for many years (a la 1960)? We shall have fun watching them over the years, I'm sure.

AHB wrote:but I am no nearer to being able to spot a signature for any of these than I was before the tasting!

Gould Campbell: coffee-style bitterness, with or without the coffee, early palate. My discovery of the night, later confirmed in the GC97 at the Berry’s Port Walk.