It was my pleasure to host the inaugural Doty Cup at the Bunghole in Holborn, with operational/logistical support provided by AHB, and placemats via JDAW/RAYC.

The Doty Cup is intended as an annual event seeking to identify the most awesome member of the London-based TPF community. This year's winner, Rob, exemplifies the ideals upon which the Doty Cup is founded, and he stormed to victory with ~400% of the point total of his nearest rival.

We served 12 glasses to each guest, double blind, in 6 flights of 2. Each pair had something connecting them (shipper, vintage, style, etc), and were intended to be a combination of wines which the group had recently tasted (e.g., magnums of the 1980 and 1985 Dow), and those potentially never to be consumed again (57 Val de Mendiz, ?? Taylor, etc).

There were several non-standard rules applied to the tasting, which include:

- No communication about the wines of any kind is permitted during the tasting (to avoid 'group think')
- In lieu of wine-talk, each guest is asked to give a semi-formal presentation (~5 minutes) on a topic on which he has some special level of knowledge
- The trophy (Rob, can we have a picture once it has been engraved with "2013 - Rob Coombes"?) is awarded to the person who's combined score (across wine guesses, presentation, and quality/completeness/originality of notes) is highest.
- The trophy cannot be won by the some person in consecutive years (as such, RAYC will be asked to help arrange the 2014 tasting, as Alex was ineligible from the 2013 tasting having filled that capacity)

Overall, I found that the wines showed incredibly well, especially the 45T, 57Fv and the ??T. The 67N also deserves recognition, but was just a half-step off the pace, in my view.

Neither tawny was remarkable, but I thought it was fun to drink two 20YRs separated by 30+ years in bottle.

While I was hoping the Noval and the Nacional 87s would be stars, neither really seemed special to me -- possibly owing to lack of sufficient bottle age / aeration, and possibly also just to the fact that they aren't especially good. Still, it was great to have them side-by-side -- a rare treat.

I also enjoyed the fact that only one taster (Derek), correctly identified that the last flight contained identical wines as the penultimate flight. It was especially amusing considering that both bottles were consumed by the group in the very room only a few weeks prior.

A complete list of wines (with various identifiers) is below. A smashing evening in my book (before I mention that Hugh Grant was at the bar and later occupied the room adjacent to ours!).

Sounds terrific, Chris. Good to have you back "from the dead".

Hahah. Thanks Axel -- it was indeed a lot of fun, and we were sorry you were unable to join. Hopefully this will not be the case in 2014!

I am back in town in June (and then hopefully also in October). Hopefully you'll be around and we can catch up.

iPad is not good for replying to multi-layered quotes so:

2. T45 should be served at breakfast, lunch and dinner.

4. Silence while tasting - I partly agree with JDAW but also see the value in preventing group think.

Many thanks to Chris for organising such a great and original event, and for his generosity with such a varied and interesting line-up!

- i don't need to say anything more about the T45, but in addition the 57 Val de Mendez and the 67 Noval were pretty spectacular i thought (as well as being thoroughly unusual)

- the Noval 87s were perfectly good drinking (and the Noval 87 may even be good QPR...the same probably can't be said about the NN87 in pure point terms, though drinking one is always special). Again, a fantastic opportunity to try these side by side.

- The Dow 85 continues to really impress me for current drinking. Though it doesn't seem to be the "monster" that some tasting notes on the board indicate it to be.

In terms of the event, i loved the format, and wouldn't change a thing apart (perhaps!) from the speeches. Silence (in terms of port-related discussion) while tasting was a really interesting exercise and certainly worth doing once in a while - it definitely suited this event. There's time after dinner to re-visit and discuss...

I'll post a pic of the Doty Cup as soon as i have had it engraved.
Rob C.
Top

I've just found copies of the Wine of the Night and Question Sheets - the latter being what I used to record peoples' gusses of the links between each pair of wines. 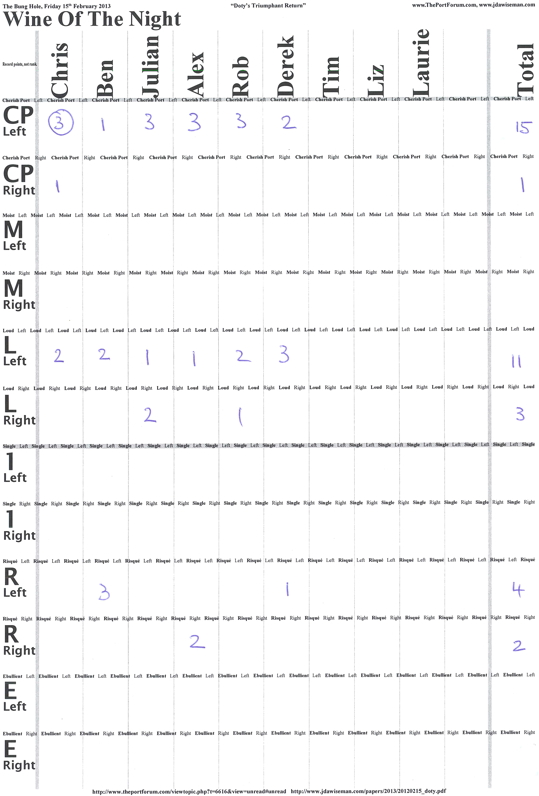