Wednesday 8th January 2014: Ronnie Roots was visiting London, so we did the obvious.

There was some confusion about who was coming. CPR decided rather late to join, taking the traditional extra empty-name pages. JDAW might have been coming, but was cancelled by Mrs W in the morning. That nudged RAYC into taking the emptied seat. Then the Mr W - Mrs W date was cancelled, so Mr W was coming. But couldn’t be JDAW, of course, as RAYC was now JDAW. So a placemat for ‘new guest’ was drawn onto the paper table-‘cloths’ of the Bung Hole.

So, mostly, JDAW is actually RAYC, and ‘new guest’ is JDAW.

But the returning officer, AHB, did something different on the voting sheets.

What could go wrong? 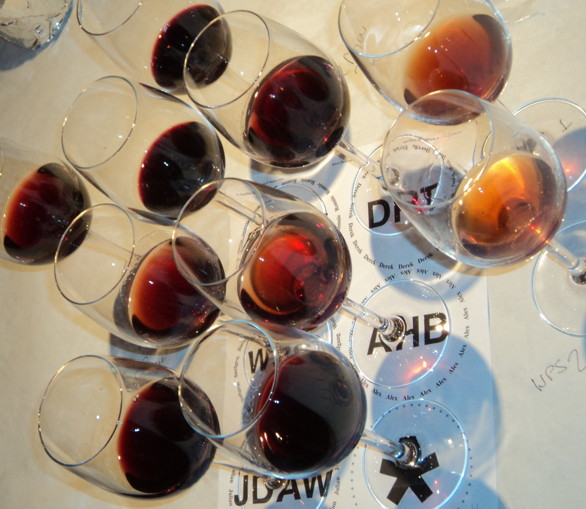 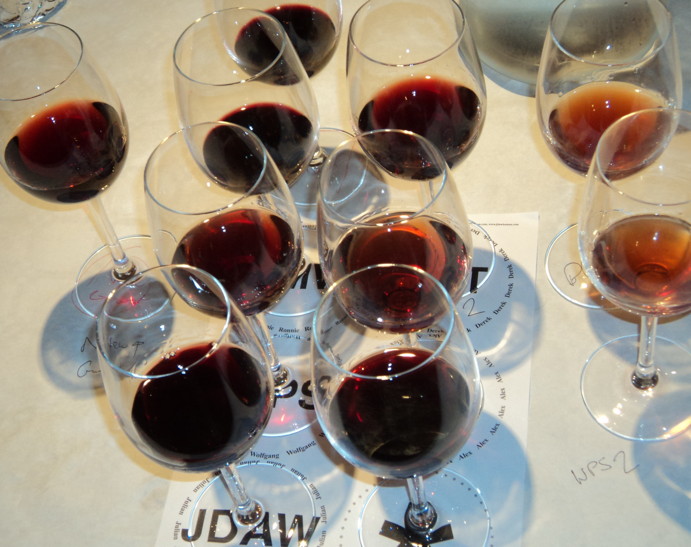 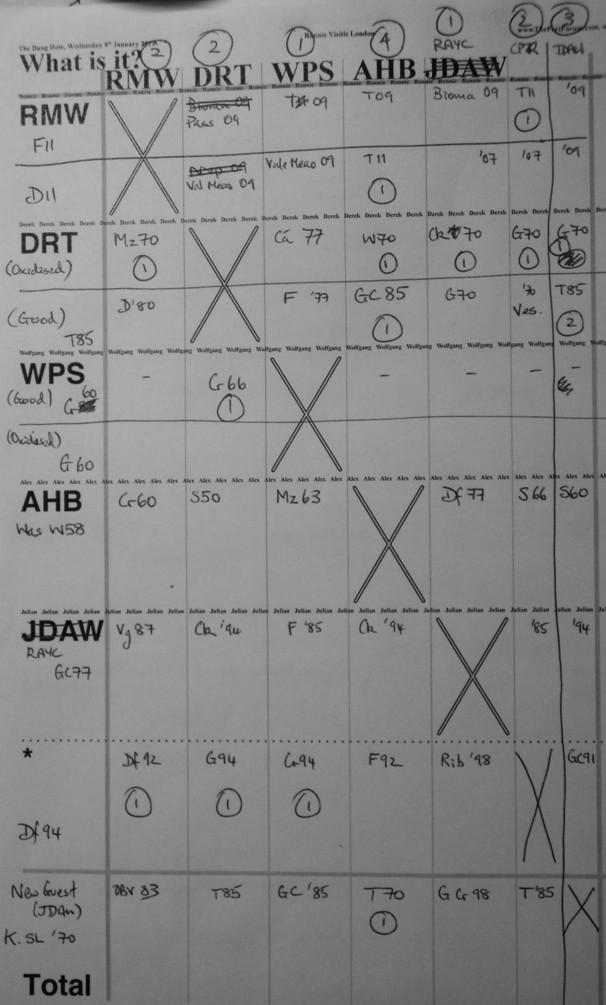 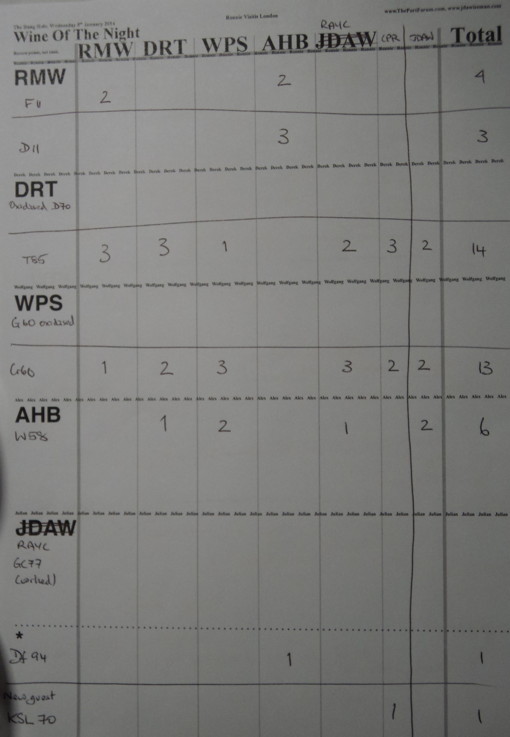 Ronnie's visit to London was a great reason for me to use up one of my two January passes for port-tastings, but now I am back on the wagon - but still with another pass to use before the end of the month if anyone is interested!

Total confusion reigned last night as 7 people turned up with 10 bottles for a tasting to which 5 people were expected to bring 5 bottles. Naturally enough, we coped. RAYC was JDAW for the evening; CPR was *, JDAW was consigned to the end of the table where DRT had artistically prepared a placemat for him. Hopefully a picture was taken of JDAW's placemat (the actual JDAW, not that evening's JDAW, who was really RAYC...who is really RAC, but that's a story for another review thread).

As to the ports, there was RMW 1 & 2 (both half bottles, one in a tall bottle and one in a half bottle), DRT 1 & 2 (one oxidised and one delicious), WPS 1 & 2 (one delicious, one only available in small qualtities), an expected bottle (*) from CPR and an unexpected bottle from JDAW in his capacity as the representative of the tablecloth makers guild. Complete confusion reigned with no consistency at all as to which port should be in which glass on which circle - and even how many extra circles had to be drawn on the tablecloth (I had 4, the guest formerly known as JDAW had 3).

Despite the chaos, there was only 1 occasion when someone tasted and commented on the wrong port, which was pretty good going. I insisted that the "Guess the port" sheet be photographed and recorded for posterity as it is many months or years since I last managed to be the least bad of the tasters round the table in identifying the ports served blind. I managed an impressive 4 /14 points.

It was also a nice way to start off the year, to catch up with Ronnie and to drink some nice (and some bad) ports. Thanks to everyone who could make it, it was good to see everyone again.
Top Ports in 2021: Niepoort Garrafeira 1931; Niepoort VV (1960s bottling) and Cockburn 1969 Single Harvest Tawny

AHB wrote:I insisted that the "Guess the port" sheet be photographed and recorded for posterity as it is many months or years since I last managed to be the least bad of the tasters round the table in identifying the ports served blind. I managed an impressive 4 /14 points.

A fine evening indeed and good to see everyone after my enforced absence.

I have mixed feelings about bringing the WOTN and the WWOTN.

I thought the T85 was one of the finest examples of that wine that I have tasted. For those interested, and willing to pay full-whack retail price, it was sourced from Uncorked on the day of the tasting and was described to me as being from a stock that was "very recently shipped from Oporto".
"The first duty of Port is to be red"
Ernest H. Cockburn
Top

Because it was heavily handicapped and it will become a good stew rather than being poured and becoming a left over!

I had some really good and expensive stews over the years; e.g. Taylor 1912 stew, Vega Sicilia 1970 stew, etc.

It was a very nice evening indeed! We had a very interesting and big variety of ports and good company!

Sadly my idea of an educational session for RAYC with the Grahams 1960 went badly.

A great evening with old and new friends and a "new guest" that looked suspiciously like JDAW. An incredible mixed bag of ports, which made it a lot of fun to taste.

DRT wrote:I have mixed feelings about bringing the WOTN and the WWOTN.

It's rather worrying that your duff bottle of D70 comes from the same supplier as my stash of F70, of which the first bottle also showed awkwardly old (mental note, must open a new bottle as soon as possible).


DRT wrote:I thought the T85 was one of the finest examples of that wine that I have tasted.