People gathered in the Bung Hole to do the obvious. There was a chance of being joined by a newbie, to sample his TV64, but he was a no-show.

A thoroughly enjoyable event was had by all. It was a pleasure to meet new faces. Of note was the Offley 83, which exceeded my expectations and is something I will look out for in the future.
Top

I was there and I even took the WOTN votes - which I still have in my folder. I must scan these and get the pictures of them onto TPF.

It was an interesting night with another chance to compare the Graham 1983 with the 1985. The 1985 won hands down, and was the preferred wine that evening. The unexpected DRT served his bottle blind; none scored a single point but Magnus was closest with his guess of Taylor 1977 for a port which turned out to be Malvedos 1976.

It was a gentle and relaxed evening with much discussion, ending when TBH staff politely pointed out that they had an early start the next day. Most decided to call it a night and retire, but two or three vanished into the Red Lion for a swift few to wash away the taste of the port.
Top Ports in 2021: Niepoort Garrafeira 1931; Niepoort VV (1960s bottling) and Cockburn 1969 Single Harvest Tawny

Uploaded by request of AHB.

Uploaded by request of AHB. 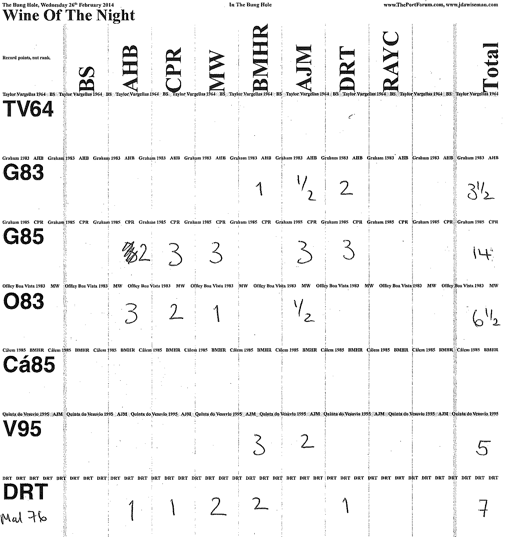 A good showing for the Offley ’83.
Top