Links for a tasting of Graham's and Graham's Malvedos at the Bunghole on Tuesday 13 November 2012. 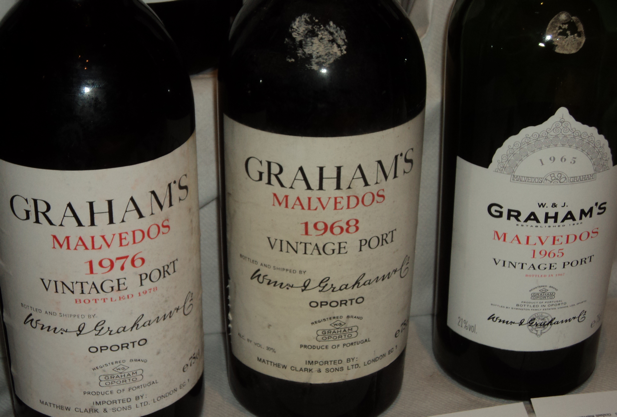 Dark brown. Somewhat closed nose but a nice, balanced palate that was the equal best of the Malvedos ports for me along with the 87.
Top

Very nicely matured Vintage Port with absolutely no signs of decay. Recorced by the Symingtons. My favourite Malvedos from the evening and overall to enjoy right now.

Medical advice was taken, correcting an earlier mis-understanding. Previously DRT had thought that drinking port from one’s birth year, within Â±7 days of one’s birthday, protects against death in that year.

Not quite, it is actually simpler. Drinking port from one’s birth year protects against death for the following year. One has 365 days of immortality, and sometimes 366. For those who are forgetful, it might be easiest just to have some on every birthday, but more often, even if far from the relevant day, works just as well.
Top

This is splendid news. Did the medical advice suggest that that frequent dosage would have any kind of cumulative effect, thereby extending the period of immortality?

I have a hunch that the consumption of a double magnum could perhaps add a decade to one's life. Unfortunately, the medicine does not appear to exist in that format